Xero is a global small-business accounting software company with more than a million customers. Social media and thought leadership play a key role in Xero’s marketing and communications to customers, partners, and investors, and the Xerocon events are the highlight of the year in each of Xero’s major country markets.

The company has used Strea.ma at its Xerocon series of conferences in Auckland, San Francisco, Denver, Sydney, Melbourne, and London. Described by one award winner as  “Coachella for accountants”, #Xerocon has become the event of the year to attend. With Strea.ma’s help, Xero’s conference hashtag #xerocon was the number one trending hashtag in New Zealand. And that was on the same day as the launch of the iPhone X!

Xero incorporates live social media feeds into their epic conferences with a Strea.ma display – and they go LARGE, making sure it’s an eye-catching feature. 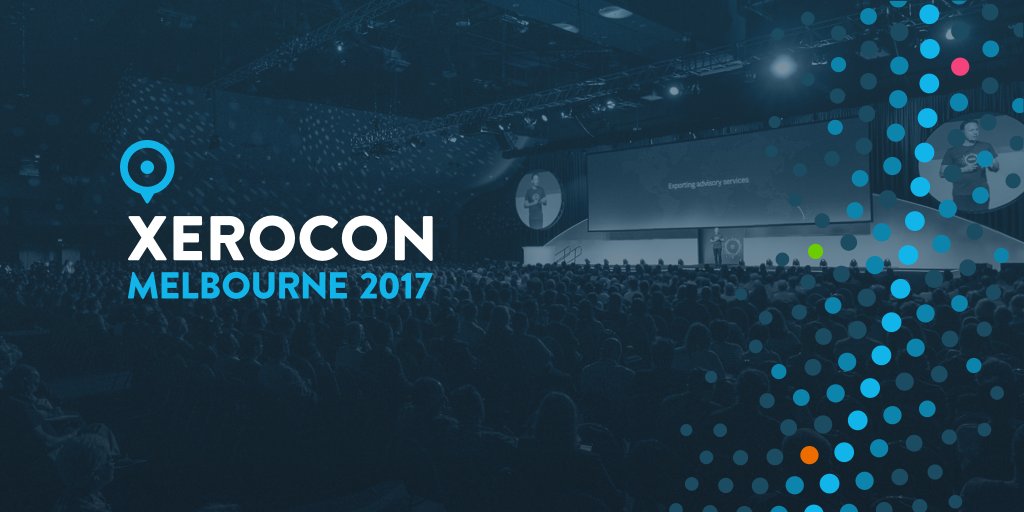 Looking through the live stream of posts from across Twitter and Instagram, you could be forgiven for thinking you were seeing a real-time feed from a Google event, or some other Silicon Valley start-up. Nope – it’s accountants, and they are having a blast. 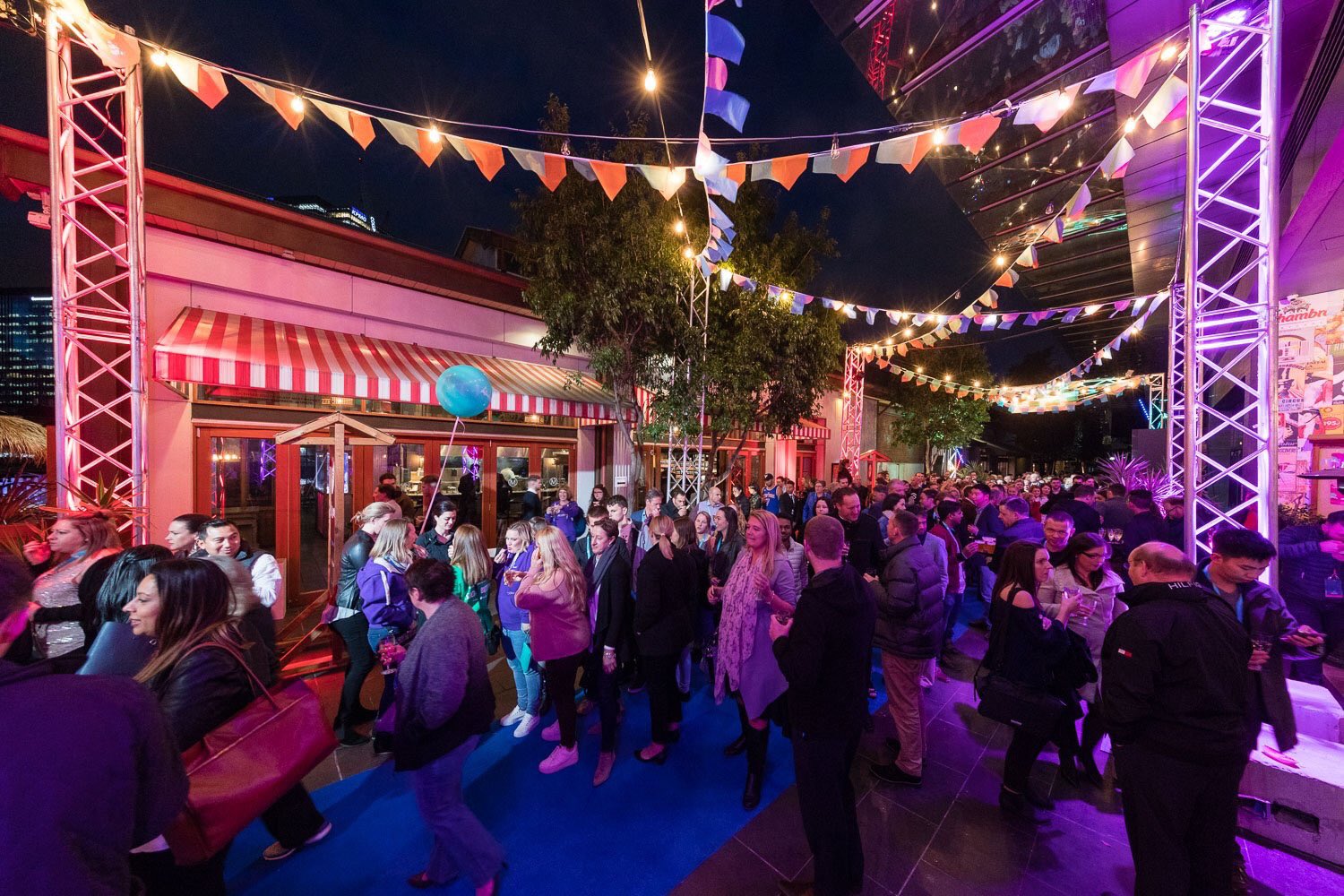 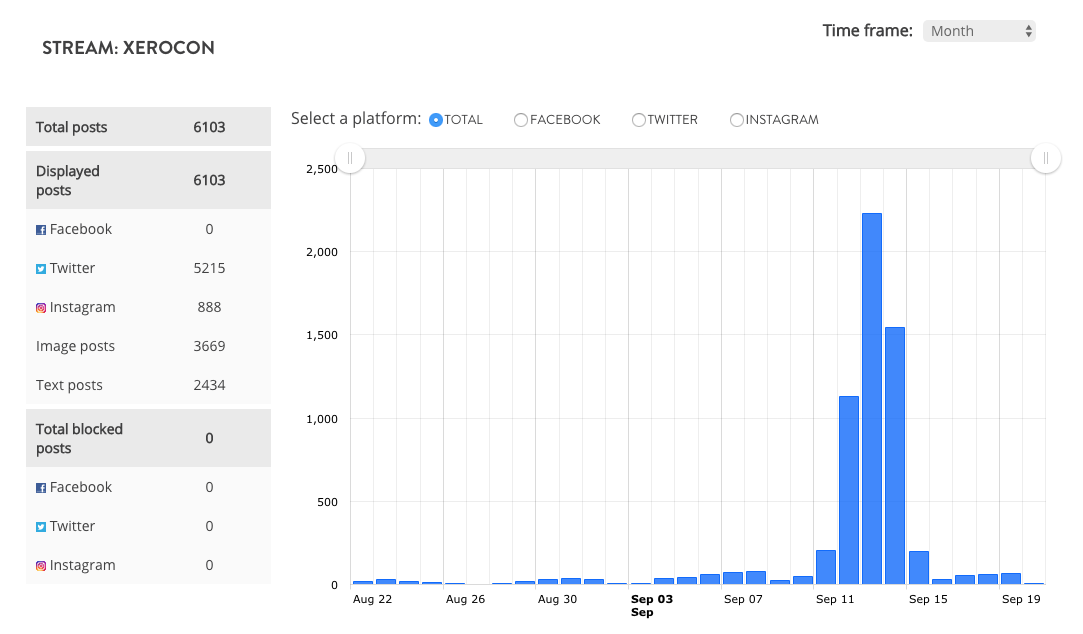 On the first day, their hashtag #Xerocon was used 5,220 times across 6,103 posts, with around a third of that activity in a single day. They were trending on Twitter and creating envy across Australia and NZ for every accountant that wasn’t able to attend (and frankly, most of our office!). 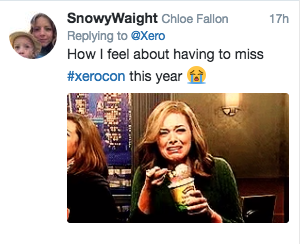 So what’s their secret to success?  We believe it’s because Xero do a great job of (a) seeding their social media feed with their event hashtag in the lead-up, and (b) showcasing the feed in a dramatic way that attendees can’t help but see and be wowed by. The visual impact drives huge engagement which brings a buzz to the event.  Delegates connect and engage not just in person, but online as they share their own highlights and meet-ups, and retweet and reply to others doing the same.

“Last week we used Strea.ma for Xerocon, Xero’s annual NZ Partner conference with over 800 attendees in person and thousands of partners and customers all over the world watching the event with social media. Strea.ma provided a live stream of social updates from the conference attendees and those watching in. It was a revolution in participation by people inside and outside of our event. Once you’ve seen Strea.ma you couldn’t imagine a conference without it.”– Rod Drury, founder and CEO of Xero

“I have to say Strea.ma’s a great thing to have at a conference. People were tweeting, especially pictures, just to see themselves on telly! Even stuff like “Hi Mum #xerocon”. And people would crowd around the screens we had up in the common areas to watch the stream change and update. We were up against the new iPhone launch that day and it was awesome to see others we share that list with that day. Trending in Aus AND NZ :)”– Catherine Walker, Community Manager, Xero

There are three plans to choose from, with monthly and annual subscriptions, to suit the needs and budget of every customer.

“We were looking for an affordable, yet dynamic way to display our social media accounts so our attendees could have a one of a kind experience. The price point is second to none, and the customization is wonderful and the workflow is easy to learn. We have used and researched many different social walls, and Strea.ma has been the best by a mile. Thank you!”

“Projecting all our event-related social media in real time onto a big screen caught people’s attention and encouraged participation from guests. Strea.ma enabled us to amplify the event beyond those who were physically there. Not only did we achieve high levels of engagement and participation with the event across social media on the night, but this also converted to a high level of impressions post event. What better way for the night to live on!”

“Last week we used Strea.ma for Xerocon, Xero’s annual NZ Partner conference with over 800 attendees in person and thousands of partners and customers all over the world watching the event with social media. Strea.ma provided a live stream of social updates from the conference attendees and those watching in. It was a revolution in participation by people inside and outside of our event. Once you’ve seen Strea.ma you couldn’t imagine a conference without it.”

“We were looking for a program that would pull all the social media commentary for our event together in an aesthetically pleasing and informative way. We needed the program to be incorporated onto the screens at our event but also be coded into our website and optimised for mobile device use.”

“Strea.ma was so quick to set up! We created a stream 10 minutes before our event started, put it up on a projector, and boom. It was done. I was also incredibly thankful for the “filter” and “moderation” options, to avoid any inappropriate posts that may have been shared.”

“Now that we average 10,000 tweets during our 4-day event we needed something more robust that could do live moderation and integrate other platforms like Instagram. We really value the ease of setting up Strea.ma and the ability to embed the stream on our website. Strea.ma is ready for you to launch in minutes and it is a super affordable price. Try it out to see how beautiful and visual it looks!”

“Last year before including a social wall, the only social media postings were the ones we did as a company. This year, we noted over 100 of our attendees posting on social media – an invaluable and inexpensive way to increase our online presence! Plus we framed our Strea.ma page into our intranet dashboard so the few people who couldn’t attend could see real-time feeds of the many photos.”

“Strea.ma is an affordable and effective program which is easily managed to ensure brand reputation is upheld. It will impress event guests and inspire user-generated content and brand/event interaction. With a concept so consistent with the theme of our marquee, we couldn’t go past Strea.ma! Guests & celebs loved seeing the posts on the big screen.”

“We wanted a social wall solution for our annual Awards banquet to encourage attendees to post on their own social media. Our venue was going to charge us to set this up; but we were able to use Strea.ma for a fraction of what they quoted.”

“We had a great experience using Strea.ma and will definitely use it again at our next event. Strea.ma hit everything on our objective list, gave us immense control in term of branding and look for a great price, was super simple to set up and helped amplify our event.

10/10 would definitely recommend. Keep up the awesome work!”